The following text was written by Paul Zollo to accompany the release of Cocomo: 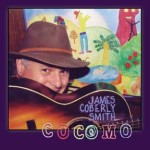 He wasn’t made for these times. But the 21st century is damn lucky to have a guy like him around. Because he writes and performs songs that belong to the ages; when they swing, they swing with the authority of real swing. When they’re blue, they’re about the deepest darkest blue you’re going to hear. And when they’re happy, the happiness is real, and it’s infectious.

So much of the music of modern times is about using mechanical means to imitate sounds, to make what isn’t real seem like it is. His music is anything but that. In fact, it’s the exact opposite. It’s about the timeless truth. It’s about what’s real: real people and real love and real voices singing real harmonies with real acoustic guitars and piano and percussion and hands clapping, and nothing is programmed here, and nothing is fake.

I remember the first time I heard him. It was in the black & white corridor of an old, haunted office building on Hollywood Boulevard, just down the hall from where Philip Marlowe should have had his office, if he didn’t. And there stood Coberly, a happy man in a big hat with an old black 12-string strapped around his shoulders. And he started playing. Only he didn’t just play this song, he inhabited it. And maybe I just imagined this, but as things started heating up I’m pretty sure I saw some blue smoke curling off the strings of his guitar, and I also think at one point I actually saw him bend back the neck of his guitar like it was a willow tree while cooking up an astounding, bluesy frenzy, working that slide of his and getting that great silvery sheen of metal on steel. And I could swear I saw blue sparks flying from his fingers as strangers started emerging from behind previously closed doors to find out what all the hubbub was about, and soon they were swinging right along with him and clapping their hands, and I can’t be sure of any of this, but I know I’m not the only one who felt that entire building rotate at least once before it all was over. And for weeks, people throughout this building could be heard asking each other, “Hey! Who was that guy in the hat? That guy with the 12-string — Who was that guy?” It’s a question I’d encounter many more times, as I’d hear him play in assorted clubs and cafes throughout the greater and lesser Los Angeles region: “Hey! Who was that guy in the hat?”

And I would tell them. He goes by the name James Coberly Smith. Born and raised in Racine, Wisconsin, not far from Green Bay. A virtuoso 12-string slide-guitarist. And a very funny, jovial fellow.

And that’s who I thought he was. And I wasn’t wrong, but I didn’t have the whole picture. Because for the first many times I heard him play, he played only instrumentals, and so I had no idea what a fine songwriter and singer he was. It was at one of Jeff Gold’s great Sunday afternoon song-circles and pasta-fests a few years back that I first heard one of his songs. “Valley Of The Kings.” And the room went silent. And instantly he inhabited the song, just as he’d inhabited that instrumental the first time I heard him. And every note he sang, and every note he played on the guitar, and every word, was right.

And then I heard some of the other songs. Beautifully sad ones. Bright, whimsical ones. Deeply romantic ballads like “If You Leave Before Me.” Hilarious, swinging songs such as “Flypaper Highway.” Sprightly, jaunty love songs as effervescent as love itself, like “Ain’t Got Money.” Songs that swagger with barroom bluster and bravado, such as “Bad Ideas.” Sunny, luminous anthems of undying love, such as “Mary Ann.” Songs of desolation and dark remorse, as in “Where Did My Hope Go.” Songs of haunting admonition and wistful mystery such as “Mabel.”

And it was all good. There was nothing phony or contrived, nothing there just for effect. And when so much of modern music contains nothing but effects, that’s no small achievement.

Then I heard him playing one of his frequent shows with Severin Browne, in which the two amiably back each other up, and I recognized Coberly’s secret weapon, the source of his shimmer: He’s got a genuine love for music. Whether he’s playing his own songs, or backing up somebody else, he never lets you forget it. This isn’t artifice. This isn’t commerce. This isn’t about failure or success. This is about music. He’s not a guy who gets onstage or makes a CD because he’s vying for fame and fortune. He’s not trying to be the new Dylan, or even the old Dylan. He does it, in the words of the late great Townes Van Zandt, for the sake of the song.

This is one of those albums people have been waiting years to hear. I know, because I’m one of them. We’ve been waiting. Waiting while a profusion of friends and strangers put out their albums. Where is it? we asked. When already? Because he’d already put out a great album of his guitar instrumentals. And he’d been promising – well, threatening, really – to put out an album of his songs for some time. The songs we know and love, those of us in the know. And we heard him talking – well,bragging, really – about getting hold of some of that fancy, digital recording equipment, and setting it up right in his home to make a down-home record. So when already?

Well, I’m happy to say that the time is now, and Cocomo is here at long last. And like everything the guy in the hat does, it’s a fine piece of work. It’s got all his greatest hits, and what’s more, he does them justice.Cocomo‘s production, like all its other elements, is delicately measured, grounded on Coberly’s soulful singing and intrepid twelve and six-string guitar work, and peppered with poignant vocal and instrumental embellishments, such as Deborah Vitek’s beautiful oboe and English horn on “Unprotected Heart,” Will Hollis’ Hammond organ on “Where Did My Hope Go,” Chad Watson’s mandolin on “Mabel,” Bobby Malone’s keyboards on “Bad Ideas,” and an especially inspired Irish flute flourish by the man himself at the end of “Where Did My Hope Go.” This is good stuff.

It all goes to show that old sayings are often true. Especially the one that says greatness can’t be rushed. And the one that says good things are worth waiting for. Also those ones about spilled milk and unhatched chickens and all, but I’m not so sure how they relate. What matters here is that the guy in the hat took the time to get it right. And it was worth the wait.

Paul Zollo is a songwriter and author. He has done in depth songwriting interviews with scores of writers, including Bob Dylan, Paul Simon, Tom Petty, and Neil Young (see the book: Songwriters On Songwriting). He has contributed album liner notes to Paul Simon and Laura Nyro, among others.

You can find music from Cocomo and The Great 12 String Adventure on iTunes, CDBaby, and  Amazon‘s MP3 store.